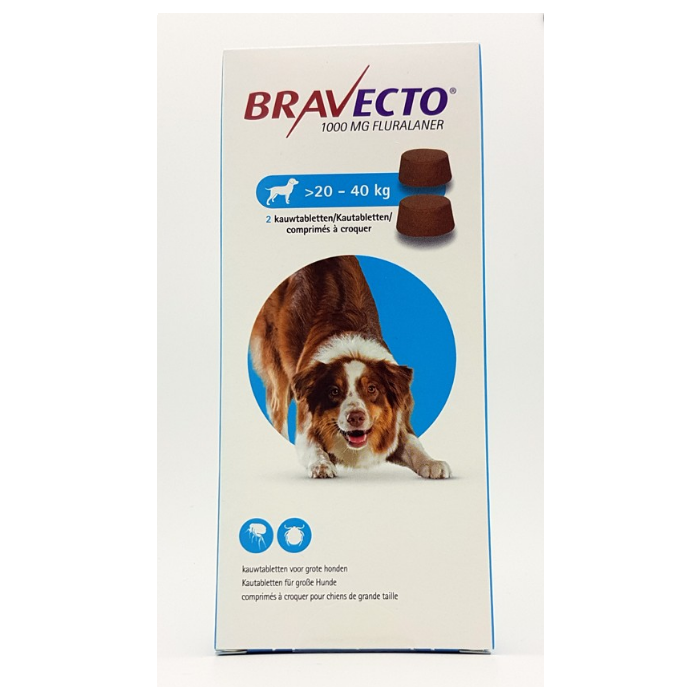 Bravecto Chewable Tablets are an antiparasitic tablet designed for dogs. To be given for the management of flea or tick infestations in dogs. A single dose can provide 12 weeks of protection from fleas and most types of ticks. Suitable for large dogs (20 - 40kg).
Be the first to review this product
Add to Compare
£60.99
In stock
Reference
MED-8130937
Add to Wish List

Bravecto Chewable Tablets are an antiparasitic tablet designed for dogs. To be given for the management of flea or tick infestations in dogs. A single dose can provide 12 weeks of protection from fleas and most types of ticks. Suitable for large dogs (20 - 40kg).

Indications for use
For the treatment of tick and flea infestations in dogs.
This veterinary medicinal product is a systemic insecticide and acaricide that provides:
- immediate and persistent flea (Ctenocephalides felis) killing activity for 12 weeks,
- immediate and persistent tick killing activity for 12 weeks for Ixodes ricinus, Dermacentor reticulatus and D. variabilis,
- immediate and persistent tick killing activity for 8 weeks for Rhipicephalus sanguineus.
Fleas and ticks must attach to the host and commence feeding in order to be exposed to the active substance. The onset of effect is within 8 hours of attachment for fleas (C. felis) and 12 hours of attachment for ticks (I. ricinus).
The product can be used as part of a treatment strategy for the control of flea allergy dermatitis (FAD).

This is a Prescription Only Medicine (POM-V)
Bravecto Chewable Tablets are only available with a prescription from your veterinary surgeon.
To check the most up to date information about this product, please read its Summary of Product Characteristics (SPC) below:
http://www.vmd.defra.gov.uk/ProductInformationDatabase/Default.aspx