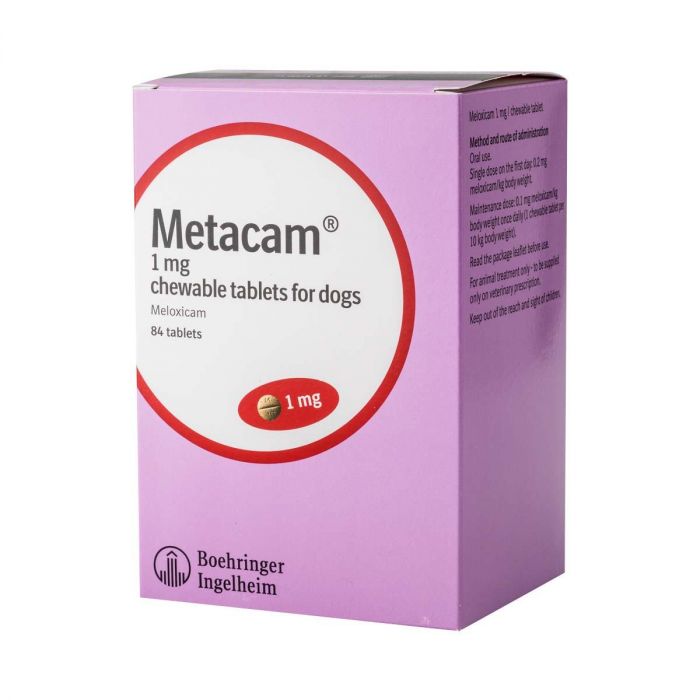 Metacam is used for the relief of pain and inflammation associated with musculo-skeletal disorders in dogs.
Be the first to review this product
Add to Compare
£40.49
Out of stock
Reference
MED-00042
Notify me when this product is in stock
Add to Wish List

Metacam is a tablet that is used for the management of inflammation and pain in both acute and chronic musculo-skeletal disorders in dogs.

Round mottled beige biconvex chewable tablets, scored on the upper side with embedded code "M10" on one side. The tablet can be divided into equal halves.

Do not use in dogs less than 6 weeks of age or less than 4 kg body weight.

This product for dogs should not be used in cats as it is not suitable for use in this species. In cats, Metacam 0.5 mg/ml oral suspension for cats should be used.

Typical adverse drug reactions of NSAIDs such as loss of appetite, vomiting, diarrhoea, faecal occult blood, lethargy and renal failure have occasionally been reported. In very rare cases haemorrhagic diarrhoea, haematemesis, gastrointestinal ulceration and elevated liver enzymes have been reported. These side effects occur generally within the first treatment week and are in most cases transient and disappear following termination of the treatment but in very rare cases may be serious or fatal.

Metacam must not be administered in conjunction with other NSAIDs or glucocorticosteroids.

Pre-treatment with anti-inflammatory substances may result in additional or increased adverse effects and accordingly a treatment-free period with such veterinary medicinal products should be observed for at least 24 hours before commencement of treatment. The treatment-free period, however, should take into account the pharmacological properties of the products used previously.

People with known hypersensitivity to Non-Steroidal Anti-Inflammatory Drugs (NSAIDs) should avoid contact with the veterinary medicinal product. In case of accidental ingestion, seek medical advice immediately and show the package leaflet or the label to the physician.