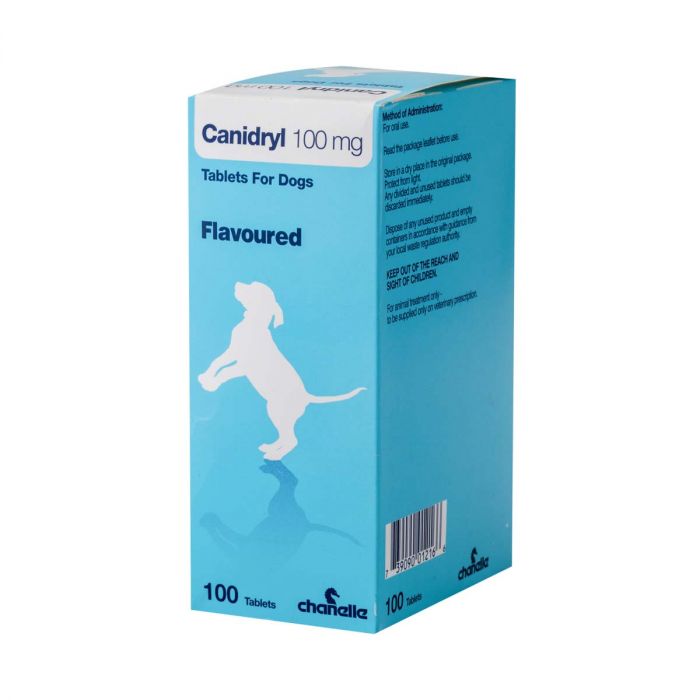 Canidryl is used for the management of pain and inflammation caused by musculo-skeletal disorders, degenerative joint disease and also for post-operative pain.
Be the first to review this product
Add to Compare
£115.99
In stock
Reference
MED-00038
Add to Wish List

What is Canidryl and who is it for?

Canidryl is a flavoured tablet for the reduction of inflammation and pain caused by musculo-skeletal disorders and degenerative joint disease. As a follow up to parenteral analgesia in the management of post-operative pain for soft tissue surgery.

Canidryl is only available with a prescription from your veterinary surgeon.

Grilled meat flavoured tablet. A plain round flat bevelled edge white tablet with a breakline on one side. The tablets can be broken into equal halves.

How do I use Canidryl?

Canidryl is a prescription product and must be used according to the instructions of your veterinary surgeon.

Is there any further advice I should know about Canidryl?

Special Precautions for use in Animals

Use in dogs less than 6 weeks of age, or in aged dogs, may involve additional risk. If such a use cannot be avoided, dogs may require careful clinical management. Avoid use in any dehydrated, hypovolaemic or hypotensive dog, as there is a potential risk of increased renal toxicity.

Concurrent administration of potential nephrotoxic drugs should be avoided. NSAIDs can cause inhibition of phagocytosis and hence in the treatment of inflammatory conditions associated with bacterial infection, appropriate concurrent antimicrobial therapy should be instigated.

Do not administer other NSAIDs concurrently or within 24 hours of each other. Some NSAIDs may be highly bound to plasma proteins and compete with other highly bound drugs, which can lead to toxic effects.

In the event of accidental ingestion of the tablets, seek medical advice and show the doctor the package leaflet. Wash hands after handling the product.

Typical undesirable effects associated with NSAIDs, such as vomiting, soft faeces/diarrhoea, faecal occult blood, loss of appetite and lethargy have been reported. These adverse reactions occur generally within the first treatment week and are in most cases transient and disappear following termination of the treatment but in very rare cases may be serious or fatal. If adverse reactions occur, use of the product should be stopped and the advice of a veterinarian should be sought. As with other NSAIDs there is a risk of rare renal or idiosyncratic hepatic adverse events.

Use During Pregnancy, lactation or lay

Studies in laboratory species (rat and rabbit) have shown evidence of foetotoxic effects of carprofen at doses close to the therapeutic dose. The safety of the veterinary medicinal product has not been established during pregnancy and lactation. Do not use in pregnant or lactating bitches.

Carprofen must not be administered with glucocorticoids.

No signs of toxicity appeared when dogs were treated with Carprofen at levels up to 6 mg/kg twice daily for 7 days (3 times the recommended dose rate of 4mg/kg) and 6mg/kg once daily for a further 7 days (1.5 the recommended dose rate of 4 mg/kg). There is no specific antidote for carprofen overdosage but general supportive therapy, as applied to clinical overdosage with NSAIDs should be applied.