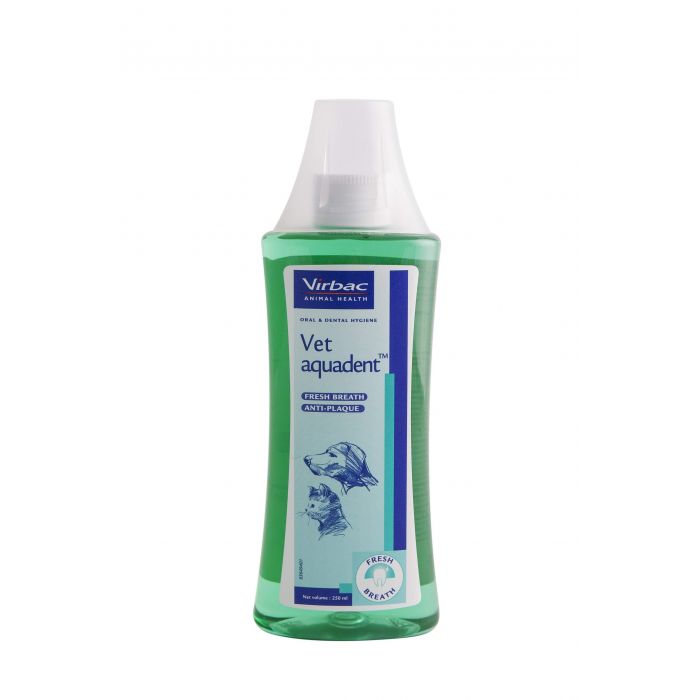 VET AQUADENT® is an easy to use drinking water additive which helps to fight dental plaque and tartar formation in dogs and cats.
Be the first to review this product
Add to Compare
£11.99
In stock
Reference
374

VET AQUADENT® is an easy to use drinking water additive which helps to fight dental plaque and tartar formation.

It has been especially formulated by vets for the daily dental and oral hygiene of cats and dogs.

Dilute Vet Aquadent in your pet's water daily. Use the measuring cup provided to administer the right amount of product.

Change the water in the bowl every 24 hours, even if all of the water has not been consumed.
Vet Aquadent is intended for the oral hygiene of dogs and cats with adult teeth, ie over 6 months old.

Vet Aquadent can be used in conjunction with a regular dental regime that includes tooth-brushing for best results.

Is the xylitol contained in VET AQUADENT® Drinking Water Additive safe for dogs?

Xylitol is included in VET AQUADENT Water Additive because of its significant benefits in oral health.  Research shows that xylitol, a five-carbon sugar alcohol, has an antibacterial effect on oral bacteria, anti-adhesive properties against dental plaque, as well as anti-calculus forming properties in both dogs and cats.1

The toxicity of xylitol to dogs has been well publicised. However, it should be noted that publicity is focused on the dangers of xylitol contained in common human products such as gum, sweets, and sugar replacement products. For example, only one piece of chewing gum can contain as much as 1,000 mg of xylitol.  This amount of xylitol may be toxic to a 10 kg dog.

VET AQUADENT Water Additive has been specifically formulated for use in dogs and cats with a safe level of xylitol when used according to label directions. In fact, Dr. Eric Dunayer, formerly of the ASPCA Animal Poison Control Center (APCC), board certified by the American Board of Toxicology, Inc. (DABT) and having a special interest in xylitol toxicosis, specifically states in a risk assessment paper written about AQUADENT Water Additive:

“Based on published studies of xylitol toxicity in dogs and the APCC’s experience, proper use of this product (according to label directions) should not present a risk of hypoglycemia in dogs. In addition, no significant hepatic toxicity would be expected either.”2

Because xylitol is rapidly metabolized, accumulation in the body does not occur from one consumption episode to the next.  To illustrate further, that same 10kg dog mentioned in the example above, would need to consume 23 litres of water treated with VET AQUADENT Water Additive in a single drinking session to receive a toxic amount of xylitol.  Therefore, pets drinking water treated with VET AQUADENT Water Additive, when used according to label directions, receive levels of xylitol well below that which has been determined to be toxic to dogs.