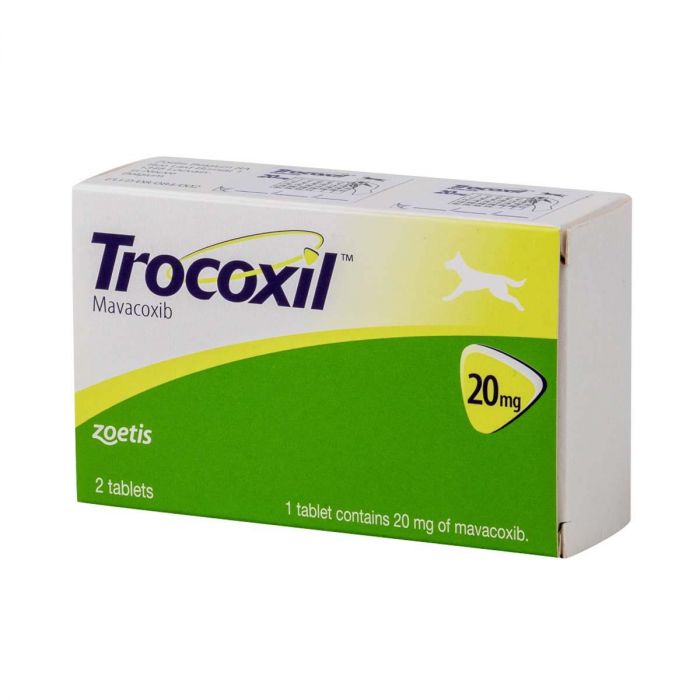 Trocoxil is used for the management of joint pain and inflammation in dogs.
Be the first to review this product
Add to Compare
£23.29
In stock
Reference
Med-6910424
Add to Wish List

What is Trocoxil and who is it for?

Trocoxil is a chewable tablet for the treatment of pain and inflammation associated with degenerative joint disease in dogs aged over 12 months. It is used in cases where continuous treatment exceeding one month is indicated.

Trocoxil is only available with a prescription from your veterinary surgeon.

What is the active ingredient in Trocoxil?

Mavacoxib is a non-steroidal anti-inflammatory drug (NSAID) of the coxib class. The principal mode of action is inhibition of cyclooxygenase (COX).
COX is a key enzyme in pathways of arachidonic acid metabolism. Its activity culminates in the synthesis of local hormones and inflammatory mediators, termed eicosanoids, which include several prostaglandins. There are two isoforms of COX, COX-1, and COX-2. COX-1 is a widely distributed constitutive enzyme, primarily involved in maintaining organ and tissue function, whilst COX-2 is inducible at sites of tissue damage but in some organs it is also constitutive. COX-2 exerts the major role in synthesising prostaglandins which have pivotal roles as mediators of pain, inflammation and fever. Mavacoxib acts by preferential inhibition of COX-2-mediated prostaglandin synthesis. It therefore possesses analgesic and anti-inflammatory properties. Both COX-1 and COX-2 are present constitutively in the kidney and are assumed to possess protective roles in adverse physiological circumstances.

Mavacoxib is well absorbed after oral administration; bioavailability was 87% in fed dogs and 46 % in fasted conditions and the recommended dose is based on administration with food. Therapeutic concentrations in fed dogs are reached rapidly and peak concentrations are obtained in less than 24 hours after administering a dose. Mavacoxib is approximately 98% bound to plasma proteins. It is extensively distributed throughout the body and almost all the mavacoxib-related residues in plasma comprise parent drug. The rate of body clearance of mavacoxib is slow and the major route of elimination is by biliary excretion of the parent drug.

Triangular, chewable tablets with a mottled brown appearance embossed with the tablet strength on one side, the reverse side is blank.

How do I use Trocoxil?

Trocoxil is a prescription product and must be used according to the instructions of your veterinary surgeon.

Is there any further advice I should know about Trocoxil?

Do not use in dogs less than 12 months of age and/or less than 5 kg bodyweight.

Do not use in dogs suffering from gastro-intestinal disorders including ulceration and bleeding.

Do not use where there is evidence of a haemorrhagic disorder.

Do not use in cases of impaired renal or hepatic function.

Do not use in cases of cardiac insufficiency.

Do not use in pregnant, breeding or lactating animals.

Do not use in cases of known hypersensitivity to sulphonamides.

Do not use concomitantly with glucocorticoids or other NSAIDs.

Do not administer other NSAIDs within 1 month of the last administration of Trocoxil.

Mavacoxib exhibits an extended plasma half life due to its low rate of elimination. This corresponds to a duration of effect of 1-2 months after administration of the second dose (and following doses). Care should be taken to avoid treatment of animals that might not tolerate prolonged NSAID exposure. A maximum treatment administration of 6.5 months continuous therapy is recommended so as to manage plasma levels of mavacoxib in animals which exhibit reduced elimination.

Avoid use in any dehydrated, hypovolaemic or hypotensive animal, as there is a potential risk of increased renal toxicity. Concurrent administration of potentially nephrotoxic medicinal products should be avoided.

Ensure appropriate hydration and haemodynamic status when animals receiving Trocoxil undergo anaesthesia and/or surgical procedures or develop conditions which may result in dehydration or compromised haemodynamic status. The key aim of intervention is to maintain renal perfusion. Patients with underlying renal disease may experience exacerbation of decompensation of their renal disease while on NSAID therapy.

Do not use in pregnant, breeding, or lactating animals. The safety of Trocoxil has not been established during pregnancy and lactation. However, studies in laboratory animals administered other NSAIDs have shown increased pre- and post-implantation loss, embryo-foetal lethality, and malformations.

No drug interaction studies have been performed. In common with other NSAIDs, Trocoxil should not be administered simultaneously with other NSAIDs or glucocorticosteroids. Risks for interactions have to be accounted for throughout the effect period i.e. 1-2 months after administration of Trocoxil. Dogs should be carefully monitored if Trocoxil is administered simultaneously with an anticoagulant.

NSAIDs are highly bound to plasma proteins and may compete with other highly bound substances, such that concomitant administration may result in toxic effects. Pre-treatment with other anti-inflammatory substances may result in additional or increased adverse effects. To avoid such effects when Trocoxil is to be administered in replacement of another NSAID, ensure an appropriate treatment-free period of at least 24 hours before administering the first dose of Trocoxil. The treatment-free period should however, take into account the pharmacology of the medicinal products used previously. Should another NSAID be administered after Trocoxil treatment, a treatment-free period of at least ONE MONTH should be ensured to avoid adverse effects.

In overdose safety studies, repeated doses of 5 mg/kg and 10 mg/kg were not associated with adverse clinical events, abnormal clinical chemistry or significant histological abnormalities. At 15 mg/kg there was evidence of vomiting, and softened/mucoid faeces and an increase in clinical chemistry parameters reflecting renal function. At 25 mg/kg there was evidence of gastrointestinal ulceration.

There is no specific antidote for mavacoxib overdosage, but general supportive therapy, as applied to clinical overdosage with NSAID’s, should be given.

In case of accidental self-administration, seek medical advice immediately and show the package leaflet or the label to the physician.

Ingestion of Trocoxil may be harmful for children, and prolonged pharmacological effects leading to e.g. gastrointestinal disorders may be observed. To avoid accidental ingestion administer the tablet to the dog immediately after removal from the blister packaging.

People with known hypersensitivity to NSAIDs should avoid contact with the veterinary medicinal product.