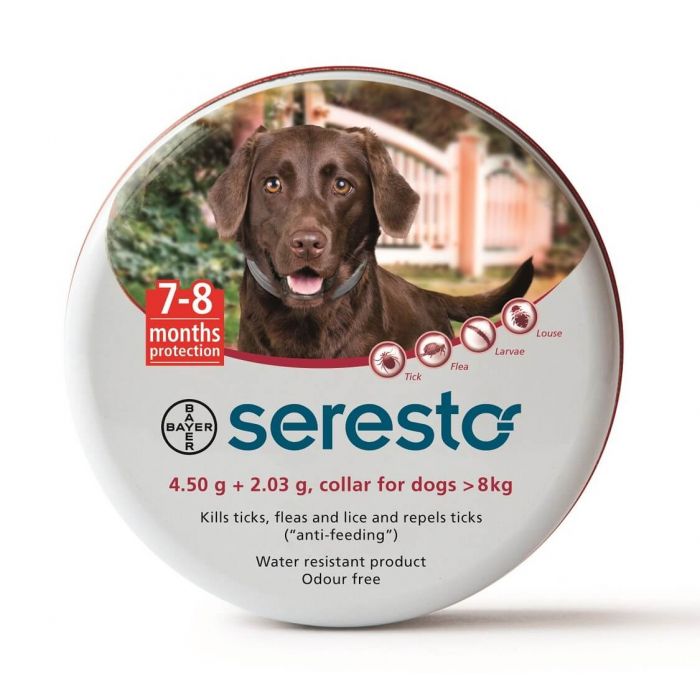 The SERESTO® COLLAR is an odour-free and water resistant, slow release collar for dogs. It's designed to protect your pet against fleas and ticks for up to 8 months, it can also be used to treat flea and lice infestations and help in the management of FAD.
Be the first to review this product
Add to Compare
£44.99
In stock
Reference
2422

SERESTO® contains imidacloprid and flumethrin. This is released slowly and continuously in low doses by the polymer matrix system of the collar onto your pet's skin and coat, where it forms a protective layer, repelling ticks and fleas.

The SERESTO® COLLAR can be used for the prevention and treatment of fleas and ticks for up to 8 months.

This is a prescription only medication (POM-V)

SERESTO® is only available with a prescription from your veterinary surgeon.

Imidacloprid is an ectoparasiticide belonging to the chloronicotinyl group of compounds. Chemically, it can be classified as a chloronicotinyl nitroguanidine. Imidacloprid is active against larval flea stages, adult fleas and lice. In dogs, efficacy against fleas (Ctenocephalides felis and Ctenocephalides canis) starts within 48 hours after application of the collar. In addition to the indications listed under the 'Uses' section, an activity against Pulex irritans fleas has been demonstrated.
Imidacloprid has a high affinity for the nicotinergic acetylcholine receptors in the post-synaptic region of the central nervous system (CNS) of the flea. The ensuing inhibition of cholinergic transmission in insects results in paralysis and death. Due to the weak nature of the interaction with mammalian nicotinergic receptors and the postulated poor penetration through the blood-brain barrier in mammals, it has virtually no effect on the mammalian CNS. Imidacloprid has minimal pharmacological activity in mammals.
Flumethrin is an ectoparasiticide of the synthetic pyrethroid group. According to current knowledge the synthetic pyrethroids interfere with the sodium channel of nerve cell membranes, resulting in a delay in repolarisation of the nerve and finally killing of the parasite. In studies on structure-activity relationship of a number of pyrethroids, interference with receptors of a certain chiral conformation was noted thereby causing a selective activity on ectoparasites. No anti-cholinesterase activity was noted with these compounds. Flumethrin is responsible for the product’s acaricidal activity and also prevents production of fertile eggs by its lethal effect on female ticks. In an in-vitro study 5 to 10 % of Rhipicephalus sanguineus ticks exposed to a sublethal dose of 4 mg flumethrin/L laid eggs which had a modified appearance (shrivelled, dull and dry) indicating a sterilising effect.
In addition to the indications listed under ‘Uses’ section, activity has been demonstrated in dogs against I. hexagonus, I. scapularis and the non-European tick species Dermacentor variabilis and the Australian paralysis tick I. holocyclus. The product provides repellent (anti-feeding) activity against the claimed ticks, thus preventing repelled parasites from taking a blood meal and thereby indirectly aids in the reduction of the risk of Vector-Borne Disease transmission.
In dogs, in addition to the pathogens listed under 'Uses' section, indirect protection against the transmission of Babesia canis canis (by Dermacentor reticulatus ticks) has been shown in one laboratory study at day 28 after treatment, and indirect protection against the transmission of Anaplasma phagocytophilum (by Ixodes ricinus ticks) has been shown in one laboratory study at 2 months after treatment, thereby reducing the risk of diseases caused by these pathogens under the conditions of these studies.
Data from efficacy studies against sand flies (Phlebotomus perniciosus) showed a variable sand fly repellent (anti-feeding) efficacy ranging from 65 to 89% for 7-8 months following initial application of the collar. Data from 3 clinical field studies performed in endemic areas indicate a significant reduction in the risk of Leishmania infantumtransmission by sand flies in treated dogs compared to non-treated dogs. Depending on the infection pressure by sand flies the efficacy in the reduction of the risk of infection with leishmaniosis ranged from 88.3 to 100%.
The collars were able to improve the Sarcoptes scabiei infestation in pre-infested dogs leading to a full cure after three months.
Both active ingredients are slowly and continuously released in low concentrations from the polymer matrix system of the collar towards the animal. Both actives are present in the cat’s or dog’s haircoat in acaricidal/insecticidal concentrations during the entire efficacy period. The active substances spread from the site of direct contact over the entire skin surface. Target animal overdose and serum kinetic studies have established that imidacloprid reached the systemic circulation transiently while flumethrin was mostly not measurable. Oral absorption of both active substances is not relevant for the clinical efficacy.
One 70cm collar in a recyclable tin container.

SERESTO is a prescription product and must be applied according to the instructions of your veterinary surgeon.

More information about this medicine for the public can be viewed here. 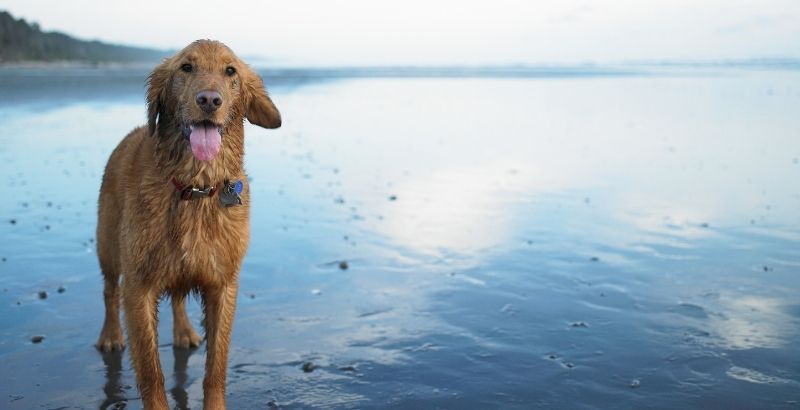