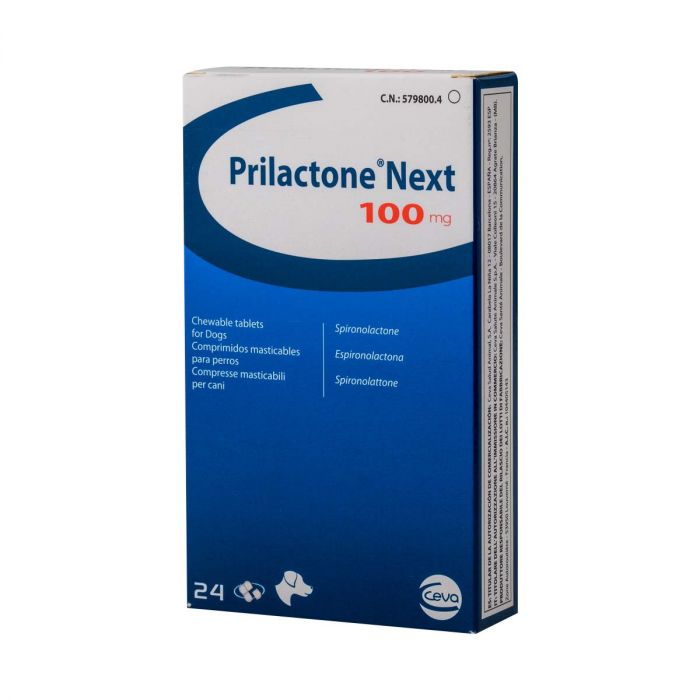 Prilactone Next 100mg Tablets for Dogs (pack of 24)

Prilactone Next is used in combination with standard therapy for the treatment of heart failure in dogs.
Be the first to review this product
Add to Compare
£45.99
In stock
Reference
MED-00041
Add to Wish List

What is Prilactone Next and who is it for?

Prilactone Next is a tablet used in combination with standard therapy (including diuretic support, where necessary) for the treatment of congestive heart failure caused by degenerative mitral valve disease in dogs.

Prilactone Next is only available with a prescription from your veterinary surgeon.

What is the active ingredient in Prilactone Next?

Spironolactone and its active metabolites (including 7α-thiomethyl-spironolactone and canrenone) act as specific antagonists of aldosterone, and exert their effects by binding competitively to the mineralocorticoid receptor located in the kidneys, heart and blood vessels.
Spironolactone is a natriuretic drug (historically described as a soft diuretic). In the kidney, spironolactone inhibits the aldosterone-induced sodium retention leading to increase in sodium and subsequently water excretion, and potassium retention. The renal effects of spironolactone and its metabolites lead to a decrease in extracellular volume and consequently in a decrease of cardiac preload and left atrial pressure. The result is an improvement in heart function.

In the cardiovascular system, spironolactone prevents the detrimental effects of aldosterone. Although the precise mechanism of action is not yet clearly defined, aldosterone promotes myocardial fibrosis, myocardial and vascular remodelling and endothelial dysfunction.
In experimental models in dogs, it was shown that long term therapy with an aldosterone antagonist prevents progressive left ventricle dysfunction and attenuates left ventricle remodelling in dogs with chronic heart failure.

When used in combination with ACE-inhibitors, spironolactone may counteract the effects of “aldosterone escape”.

A slight increase in aldosterone blood levels may be observed in animals on treatment. This is thought to be due to activation of feedback mechanisms without adverse clinical consequence. There may be a dose related hypertrophy of the adrenal zona glomerulosa at high dose rates.

Absorption: In dogs, oral bioavailability of spironolactone as measured by canrenone AUCs was 83% relative to the iv route. It has been shown that feeding significantly increases the oral bioavailability of all measured metabolites resulting from dosing dogs with spironolactone. After multiple oral doses of 2 mg spironolactone per kg for 5 consecutive days, steady-state conditions are reached by day 3 and only a slight accumulation of canrenone is observed. After oral administration of spironolactone in dogs at 2 mg/kg, a mean Cmax of 41 ng/mL is achieved for the primary metabolites, canrenone, after 4 hours.

Distribution: The mean apparent volume of distribution during elimination phase after oral dosing in dogs was 41 L/kg for canrenone.
The mean residence time of the metabolites ranges from 11 hours.
The protein binding is about 90%.

Elimination: Spironolactone is mainly excreted via its metabolites. Plasma clearance of canrenone is 3 L/h/kg for canrenone, in dogs. After oral administration of radiolabelled spironolactone to the dog, 66 % of the dose is recovered in faeces and 12 % in the urine. 74% of the dose is excreted within 48 hours.

What is in Prilactone Next?

How do I use Prilactone Next?

Prilactone Next is a prescription product and must be used according to the instructions of your veterinary surgeon.

Is there any further advice I should know about Prilactone Next?

Do not use in animals used for or intended for use in breeding.

Do not use in dogs suffering from hypoadrenocorticism, hyperkalaemia or hyponatraemia.

Do not administer spironolactone in conjunction with NSAIDs to dogs with renal insufficiency.

Do not use in cases of hypersensitivity to spironolactone or any of the excipients.

Special Precautions for use in Animals

Kidney function and plasma potassium levels should be evaluated before initiating combined treatment with spironolactone and ACE inhibitors. Unlike in humans, an increased incidence of hyperkalaemia was not observed in clinical trials performed in dogs with this combination. However, in dogs with renal impairment, regular monitoring of renal function and plasma potassium levels is recommended as there may be an increased risk of hyperkalaemia.

Dogs treated concomitantly with spironolactone and NSAIDs should be correctly hydrated. Monitoring of their renal function and plasma potassium levels is recommended before initiation and during treatment with combined therapy (see Contraindications).

As spironolactone has an antiandrogenic effect, it is not recommended to administer the product to growing dogs.

As spironolactone undergoes extensive hepatic biotransformation, care should be taken when using the product to treat dogs with hepatic dysfunction.

The chewable tablets are flavoured. In order to avoid accidental ingestion, store these tablets out of the reach of animals.

The product may cause skin sensitization. Persons known to be allergic to spironolactone or other components of the final formulation should not handle this product.

Wash hands after use.

If you develop symptoms following exposure such as a skin rash, you should seek medical advice and show the doctor this warning. Swelling of the face, lips or eyes or difficulty with breathing are more serious symptoms and require urgent medical attention.

Use During Pregnancy, lactation or lay

The safety of the product has not been assessed in pregnant and lactating bitches.

Do not use during pregnancy and lactation.

In clinical studies, the product was co-administered with ACE-inhibitors, furosemide and pimobendan without evidence of associated adverse reactions.

Spironolactone decreases digoxin elimination and hence raises digoxin plasma concentration. As the therapeutic index for digoxin is very narrow, it is advisable to monitor closely dogs receiving both digoxin and spironolactone.

Concomitant administration of spironolactone with ACE-inhibitors and other potassium-sparing drugs (as angiotensin receptor blockers, ß-blockers, calcium channels blockers, etc..) may potentially lead to hyperkalaemia (see special precautions for use in animals).

Spironolactone may cause both induction and inhibition of cytochrome P450 enzymes and could therefore affect the metabolism of other drugs utilizing these metabolic pathways.

After administration of up to 5 times the recommended dose (10 mg/kg) to healthy dogs, dose-dependent adverse effects were noted, see Adverse Reactions.

In case of an accidental massive ingestion by a dog, there is no specific antidote or treatment. It is therefore recommended to induce vomiting, lavage the stomach (depending on risk assessment) and monitor electrolytes. Symptomatic treatment, e.g., fluid therapy, should be provided.