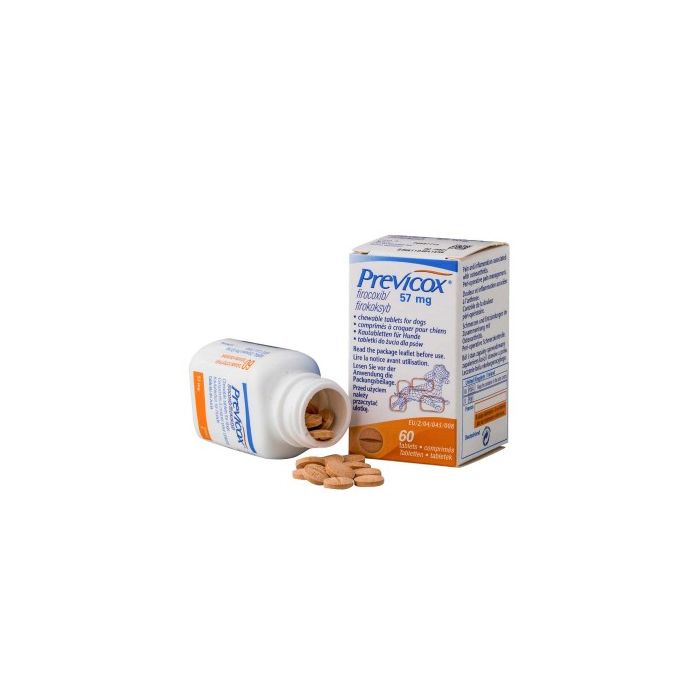 Previcox is used for the relief of pain and inflammation associated with osteoarthritis or post-operative pain due to orthopaedic, soft tissue and dental surgery in dogs.
Be the first to review this product
Add to Compare
£49.49
In stock
Reference
Med-8128202
Add to Wish List

What is Previcox and who is it for?

Previcox is a chewable tablet for dogs that is used for the relief of pain and inflammation associated with osteoarthritis. It is also used for the management of post-operative pain due to orthopaedic, soft tissue or dental surgery in dogs.

Previcox is only available with a prescription from your veterinary surgeon.

What is in Previcox?

How do I use Previcox?

Previcox is a prescription product and must be used according to the instructions of your veterinary surgeon.

Is there any further advice I should know about Previcox?

Do not use concomitantly with corticosteroids or other non-steroidal anti-inflammatory drugs (NSAIDs).

The recommended dose, as indicated in the dosing table, should not be exceeded.

Use in very young animals, or animals with suspected or confirmed impairment of renal, cardiac or hepatic function may involve additional risk. If such use cannot be avoided, those dogs require careful veterinary monitoring.

Avoid use in any dehydrated, hypovolaemic or hypotensive animals, as there is a potential risk of increased renal toxicity. Concurrent administration of potentially nephrotoxic drugs should be avoided. Use this product under strict veterinary monitoring where there is a risk of gastrointestinal bleeding, or if the animal previously displayed intolerance to NSAIDs. Renal and/or hepatic disorders have been reported in very rare cases in dogs administered the recommended treatment dose. It is possible that a proportion of such cases had sub-clinical renal or hepatic disease prior to the commencement of therapy. Therefore, appropriate laboratory testing to establish baseline renal or hepatic biochemistry parameters is recommended prior to and periodically during administration. The treatment should be discontinued if any of these signs are observed: repeated diarrhoea, vomiting, faecal occult blood, sudden weight loss, anorexia, lethargy, degradation of renal or hepatic biochemistry parameters.

Wash hands after use of the product. In case of accidental ingestion, seek medical advice immediately and show the package leaflet or the label to the physician. Return halved tablets to the blister and keep out of the reach of children.

If adverse reactions like vomiting, repeated diarrhoea, faecal occult blood, sudden weight loss, anorexia, lethargy, degradation of renal or hepatic biochemistry parameters occur, use of the product should be stopped and the advice of a veterinarian should be sought. As with other NSAIDs, serious adverse effects can occur and, in very rare cases, may be fatal.

*The frequency of possible adverse effects is defined using the following convention:

Do not use in pregnant or lactating bitches. Laboratory studies in rabbits have shown evidence of maternotoxic and foetotoxic effects at dose rates approximating the recommended treatment dose for the dog.

Pre-treatment with other anti-inflammatory substances may result in additional or increased adverse effects and accordingly a treatment-free period with such drugs should be observed for at least 24 hours before the commencement of treatment with Previcox. The treatment-free period, however, should take into account the pharmacokinetic properties of the products used previously.

Previcox must not be administered in conjunction with other NSAIDs or glucocorticosteroids. Gastrointestinal tract ulceration may be exacerbated by corticosteroids in animals given non-steroidal anti-inflammatory drugs.

Concomitant treatment with molecules displaying action on renal flow, e.g. diuretics or Angiotensin Converting Enzyme (ACE) inhibitors, should be subject to clinical monitoring. Concurrent administration of potentially nephrotoxic drugs should be avoided as there might be an increased risk of renal toxicity. As anaesthetic drugs may affect renal perfusion, the use of parenteral fluid therapy during surgery should be considered to decrease potential renal complications when using NSAIDs peri-operatively.

Concurrent use of other active substances that have a high degree of protein binding may compete with firocoxib for binding and thus lead to toxic effects.

In dogs seven months of age at the start of treatment at dose rates greater than or equal to 25 mg/kg/day (5 times the recommended dose) for six months, gastrointestinal adverse effects, i.e. vomiting were observed.

Overdose studies were not conducted in animals over 14 months of age. If clinical signs of overdosing are observed, discontinue treatment.