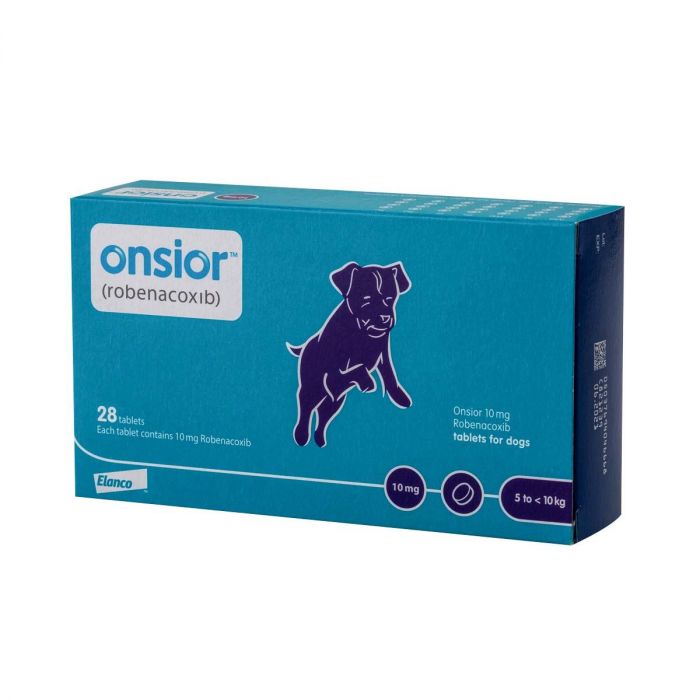 Onsior is used for the management of pain and inflammation associated with chronic osteoarthritis in dogs.
Be the first to review this product
Add to Compare
£25.99
In stock
Reference
MED-00031
Add to Wish List

What is Onsior and who is it for?

Onsior is a tablet that is used for the management of pain and inflammation associated with chronic osteoarthritis in dogs.

Onsior is only available with a prescription from your veterinary surgeon.

What is the active ingredient in Onsior?

Robenacoxib is a non-steroidal anti-inflammatory drug (NSAID) of the coxib class. It is a potent and selective inhibitor of the cyclooxygenase 2 enzyme (COX-2). The cyclooxygenase enzyme (COX) is present in two forms. COX-1 is the constitutive form of the enzyme and has protective functions, e.g. in the gastrointestinal tract and kidneys. COX-2 is the inducible form of the enzyme and is responsible for the production of mediators including PGE2 which induce pain, inflammation or fever.

In an in vitro whole blood assay in dogs, robenacoxib was approximately 140 fold selective for COX-2 (IC50 0.04 μM) as compared to COX-1 (IC50 7.9 μM). Robenacoxib produced marked inhibition of COX-2 activity and had no effect on COX-1 activity in dogs at oral doses ranging from 0.5 to 4 mg/kg. Robenacoxib tablets are therefore COX-1 sparing at recommended doses in dogs. Robenacoxib had analgesic and anti-inflammatory actions in an inflammation model in dogs with single oral doses ranging from 0.5 to 8 mg/kg, with an ID50 of 0.8 mg/kg and a rapid onset of action (0.5 h). In clinical trials robenacoxib tablets reduced the lameness and inflammation of dogs with chronic osteoarthritis.

Distribution: Robenacoxib has a relatively small volume of distribution (Vss 240 ml/kg) and is highly bound to plasma proteins (>99%).

Biotransformation: Robenacoxib is extensively metabolised by the liver in dogs. Apart from one lactam metabolite, the identity of other metabolites is not known in dogs.

Elimination: Robenacoxib is cleared rapidly from blood (CL 0.81 L/kg/h) with an elimination t1/2 of 0.7 h after intravenous administration. After oral administration of the tablets, the terminal half-life in blood was 1.2 h. Robenacoxib persists longer and at higher concentrations at sites of inflammation than in blood. Robenacoxib is excreted predominantly via the biliary route (around 65%) and the remainder via the kidneys. Repeated oral administration of robenacoxib to dogs at dosages of 2–10 mg/kg for 6 months produced no change in the blood profile, with neither accumulation of robenacoxib nor enzyme induction. Accumulation of metabolites has not been tested. The pharmacokinetics of robenacoxib do not differ between male and female dogs, and are linear over the range 0.5–8 mg/kg.

How do I use Onsior?

Onsior is a prescription product and must be used according to the instructions of your veterinary surgeon.

Is there any further advice I should know about Onsior?

Do not use in dogs suffering from gastrointestinal ulceration or with hepatic disease. Do not use concomitantly with corticosteroids or other non-steroidal anti-inflammatory drugs (NSAIDs). Do not use in case of hypersensitivity to the active substance or to any of the excipients. Do not use in pregnant and lactating animals (see section below).

In clinical studies, inadequate response to treatment was seen in 10–15% of the dogs.

The safety of the veterinary medicinal product has not been established in dogs weighing less than 2.5 kg or under 3 months of age. For long term therapy, liver enzymes should be monitored at the start of therapy, e.g. after 2, 4 and 8 weeks. Thereafter it is recommended to continue regular monitoring, e.g. every 3–6 months. Therapy should be discontinued if liver enzyme activities increase markedly or the dog shows clinical signs such as anorexia, apathy or vomiting in combination with elevated liver enzymes. Use in dogs with impaired cardiac or renal function or dogs that are dehydrated, hypovolaemic or hypotensive may involve additional risks. If use cannot be avoided, these dogs require careful monitoring. Use this product under strict veterinary monitoring in dogs with a risk of gastrointestinal ulcers, or if the dog previously displayed intolerance to other NSAIDs.

Wash hands after use of the veterinary medicinal product. In case of accidental ingestion, seek medical advice immediately and show the package leaflet or the label to the physician. In small children, accidental ingestion increases the risk for NSAID adverse effects. For pregnant women, particularly near term pregnant women, prolonged dermal exposure increases the risk of premature closure of the ductus arteriosus in the foetus.

Use during pregnancy and lactation

Do not use in pregnant or lactating dogs because the safety of robenacoxib has not been established during pregnancy and lactation or in dogs used for breeding.

Onsior must not be administered in conjunction with other NSAIDs. Pre-treatment with other anti-inflammatory medicines may result in additional or increased adverse effects and accordingly a treatment-free period with such substances should be observed for at least 24 hours before the commencement of treatment with Onsior. The treatment-free period, however, should take into account the pharmacokinetic properties of the products used previously. Concomitant treatment with medicines displaying action on renal flow, e.g. diuretics or angiotensin converting enzyme (ACE) inhibitors, should be subject to clinical monitoring. Concurrent administration of potentially nephrotoxic medicines should be avoided as there might be an increased risk of renal toxicity. Concurrent use of other active substances that have a high degree of protein binding may compete with robenacoxib for binding and thus lead to toxic effects.

In healthy young dogs aged 5–6 months, oral robenacoxib administered at high overdoses (4, 6 or 10 mg/kg/day for 6 months) did not produce any signs of toxicity, including no evidence of any gastrointestinal, kidney or liver toxicity and no effect on bleeding time. Robenacoxib also had no detrimental effects on cartilages or joints. As with any NSAID, overdose may cause gastrointestinal, kidney, or liver toxicity in sensitive or compromised dogs. There is no specific antidote. Symptomatic, supportive therapy is recommended consisting of administration of gastrointestinal protective agents and infusion of isotonic saline.