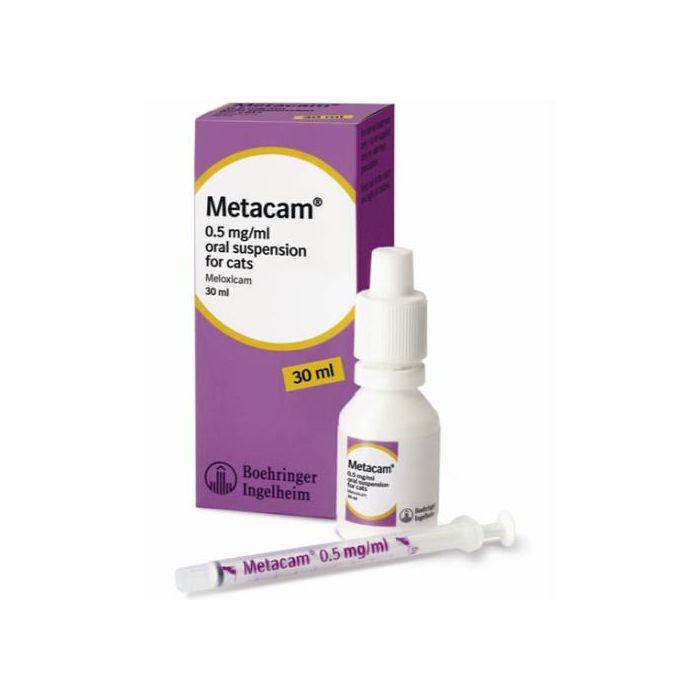 Metacam is used for the relief of pain and inflammation associated with musculo-skeletal disorders in cats. It is also used to relieve post-operative pain and inflammation in cats and guinea pigs.
Be the first to review this product
Add to Compare
£30.99
In stock
Reference
MED-00008
Add to Wish List

Meloxicam is a Non-Steroidal Anti-Inflammatory Drug (NSAID) of the oxicam class which acts by inhibition of prostaglandin synthesis, thereby exerting anti-inflammatory, analgesic, anti-exudative and antipyretic effects. It reduces leukocyte infiltration into the inflamed tissue. To a minor extent it also inhibits collagen-induced thrombocyte aggregation. In vitro and in vivo studies demonstrated that meloxicam inhibits cyclooxygenase-2 (COX-2) to a greater extent than cyclooxygenase-1 (COX-1).

Distribution: There is a linear relationship between the dose administered and plasma concentration observed in the therapeutic dose range. Approximately 97 % of meloxicam is bound to plasma proteins.

Metabolism: Meloxicam is predominantly found in plasma and is also a major biliary excretion product whereas urine contains only traces of the parent compound. Five major metabolites were detected all having been shown to be pharmacologically inactive. Meloxicam is metabolised to an alcohol, an acid derivative and to several polar metabolites. As for other species investigated, the main pathway of meloxicam biotransformation in cat is oxidation.

Do not use in cats less than 6 weeks of age.

Do not use in guinea pigs less than 4 weeks of age.

Post-operative use in cats and guinea pigs:

In case additional pain relief is required, multimodal pain therapy should be considered.

Response to long-term therapy should be monitored at regular intervals by a veterinary surgeon.

In cats, typical adverse reactions of NSAIDs such as loss of appetite, vomiting, diarrhoea, faecal occult blood, lethargy and renal failure have occasionally been reported.

These side effects are in most cases transient and disappear following termination of the treatment but in very rare cases may be serious or fatal.

Meloxicam has a narrow therapeutic safety margin in cats and clinical signs of overdose may be seen at relatively small overdose levels.

In guinea pigs, an overdose of 0.6 mg/kg body weight administred during 3 days followed by a dose of 0.3 mg/kg during 6 additional days did not cause adverse events typical for meloxicam. The safety of doses exceeding 0.6 mg/kg has not been evaluated in guinea pigs.

The safety of the veterinary medicinal product has not been established during pregnancy and lactation (See section 4.3).

Other NSAIDs, diuretics, anticoagulant, aminoglycoside antibiotics and substances with high protein binding may compete for binding and thus lead to toxic effects.

Metacam must not be administered in conjunction with other NSAIDs or glucocorticosteroids. Concurrent administration of potential nephrotoxic drugs should be avoided.

In cats, pre-treatment with anti-inflammatory substances other than Metacam 2 mg/ml solution for injection for cats at a single dose of 0.2 mg/kg may result in additional or increased adverse effects and accordingly a treatment-free period with such veterinary medicinal products should be observed for at least 24 hours before commencement of treatment. The treatment-free period, however, should take into account the pharmacological properties of the products used previously.