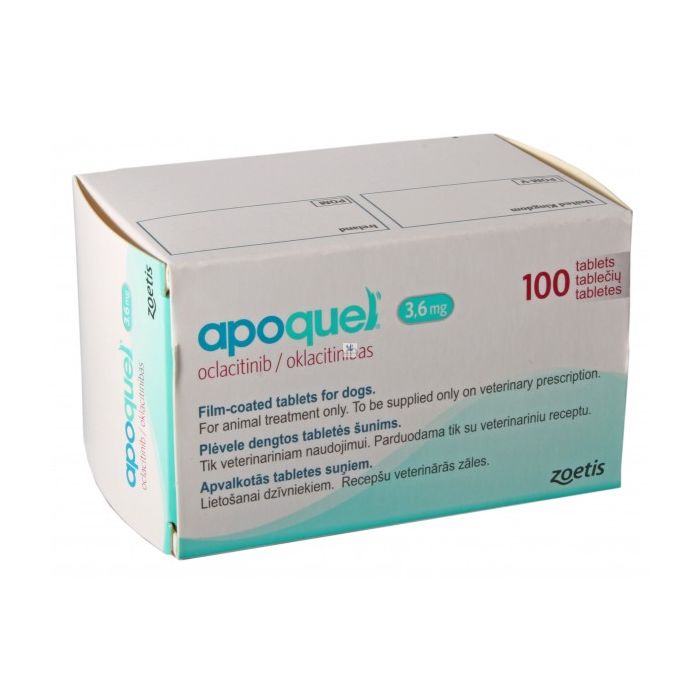 Apoquel is used for the treatment of itchy skin associated with allergic skin conditions in dogs.
Be the first to review this product
Add to Compare
£98.29
In stock
Reference
Med-8123736
Add to Wish List

What is Apoquel and who is it for?

Apoquel is a film-coated tablet that is used for the treatment of itchy skin conditions associated with allergic dermatitis and the clinical manifestations of atopic dermatitis in dogs.

Apoquel is only available with a prescription from your veterinary surgeon.

What is the active ingredient in Apoquel?

Oclacitinib is a Janus kinase (JAK) inhibitor. It can inhibit the function of a variety of cytokines dependent on JAK enzyme activity. For oclacitinib, the target cytokines are those that are proinflammatory or have a role in allergic responses/pruritis.

Overall the major clearance route is metabolism, with minor contributions from renal and biliary elimination. Inhibition of canine cytochrome P450s is minimal. Therefore, the risk of metabolic drug-drug interactions due to oclacitinib inhibition is very low. No accumulation was observed in the blood of dogs treated for 6 months with oclacitinib.

What is in Apoquel?

Film-coated tablets containing 3.6mg oclacitinib (as oclacitinib maleate). Each tablet is marked with “AQ” on one side, with “S” on the other side referring to the tablet strength.

How do I use Apoquel?

Apoquel is a prescription product and must be used according to the instructions of your veterinary surgeon.

Is there any further advice that I should know about Apoquel?

Do not use in dogs less than 12 months of age or less than 3 kg bodyweight.

Do not use in dogs with evidence of immune suppression, such as hyperadrenocorticism, or with evidence of progressive malignant neoplasia as the active substance has not been evaluated in these cases.

The safety of Apoquel during pregnancy, lactation or in dogs intended for breeding has not been established, so its use is not recommended.

Oclacitinib modulates the immune system and may increase susceptibility to infection and exacerbate neoplastic conditions. Dogs receiving APOQUEL tablets should therefore be monitored periodically with complete blood counts and serum biochemistry when on long-term treatment.

Treatment related clinical pathology changes were restricted to an increase in mean serum cholesterol and a decrease in mean leukocyte count, however, all mean values remained within the laboratory reference range. The decrease in mean leukocyte count observed in oclacitinib-treated dogs was not progressive, and affected all white blood cell counts (neutrophil, eosinophil and monocyte counts) except lymphocyte counts. Neither of these clinical pathology changes appeared clinically significant.In a laboratory study, the development of papillomas was noted in a number of dogs.

No drug interactions were observed in field studies where oclacitinib was administered concomitantly with veterinary medicinal products such as endo- and ectoparasiticides, antimicrobials and anti-inflammatories.

The impact of oclacitinib administration on vaccination with modified live vaccines, canine parvovirus (CPV), canine distemper virus (CDV) and canine parainfluenza (CPI) and inactivated rabies vaccine (RV), on 16 week old vaccine naïve puppies has been studied. An adequate immune response (serology) to CDV and CPV vaccination was achieved when puppies were administered oclacitinib at 1.8 mg/kg bodyweight twice daily for 84 days. However, the findings of this study indicated a reduction in serological response to vaccination with CPI and RV in puppies being treated with oclacitinib compared to untreated controls. The clinical relevance of these observed effects for animals vaccinated while being administered oclacitinib (in accordance with the recommended dosing regimen) is unclear.

Oclacitinib tablets were administered at 1x, 3x and 5x to healthy, one year old Beagle dogs twice daily for 6 weeks followed by once daily for 20 weeks.

Clinical observations that were considered likely to be related to oclacitinib treatment included: alopecia (local), papilloma, dermatitis, erythema, abrasions and scabbing/crusts, interdigital "cysts", and oedema of the paws. Dermatitis lesions were mostly secondary to the development of interdigital furunculosis on one or more paws during the study, with the number and frequency of observations increased with increasing dose. Lymphadenopathy of peripheral nodes was noted in all groups, increasing in frequency with increased dose, and was frequently associated with interdigital furunculosis. Papilloma was considered treatment related, but not dose related.

There is no specific antidote and in case of signs of overdose the dog should be treated symptomatically.

In case of accidental ingestion, seek medical advice immediately and show the package leaflet or label to the doctor.