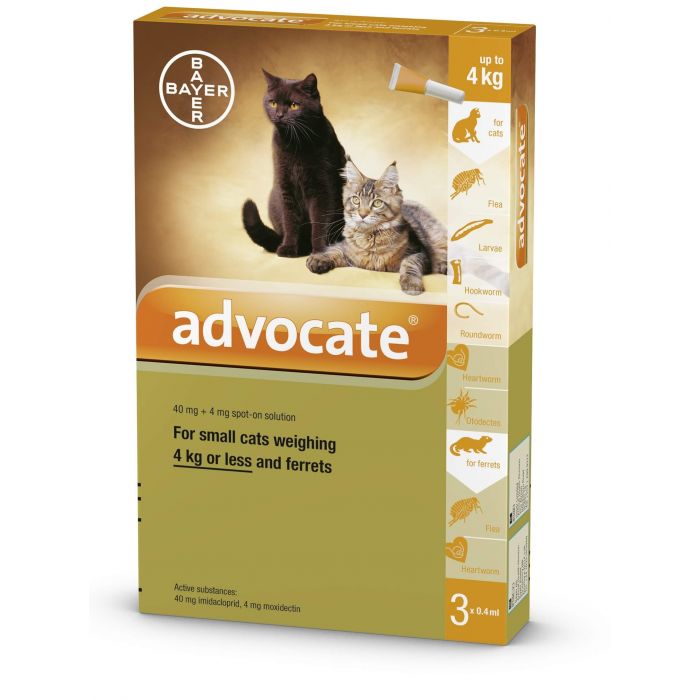 ADVOCATE SPOT-ON SOLUTION is an effective topical spot-on used for the treatment and prevention of flea infestations and heartworm in cats and ferrets, and also the treatment of ear mites and roundworms in cats.
Be the first to review this product
Add to Compare
£43.99
In stock
Reference
AD10219

ADVOCATE SPOT-ON SOLUTION contains imidacloprid and moxidectin and is an effective treatment that can be used for the prevention and treatment of external parasites such as fleas, ear and skin mites in cats and to prevent heartworm and certain roundworms. In ferrets, Advocate spot-on solution can be used to treat and prevent flea infestations and heartworm.

ADVOCATE SPOT ON SOLUTION is only available with a prescription from your veterinary surgeon.

Imidacloprid, 1-(6-Chloro-3-pyridylmethyl)-N-nitro-imidazolidin-2-ylideneamine is an ectoparasiticide belonging to the chloronicotinyl group of compounds. Chemically, it is more accurately described as a chloronicotinyl nitroguanidine. Imidacloprid is effective against larval flea stages and adult fleas. Flea larvae in the pet’s surroundings are killed after contact with a pet treated with the product. Imidacloprid has a high affinity for the nicotinergic acetylcholine receptors in the post-synaptic region of the central nervous system (CNS) of the flea. The ensuing inhibition of cholinergic transmission in insects results in paralysis and death. Due to the weak nature of the interaction with mammalian nicotinergic receptors and the postulated poor penetration through the blood-brain barrier in mammals, it has virtually no effect on the mammalian CNS. Imidacloprid has minimal pharmacological activity in mammals.
Moxidectin, 23-(O-methyloxime)-F28249 alpha is a second-generation macrocyclic lactone of the milbemycin family. It is a parasiticide which is active against many internal and external parasites. Moxidectin is active against larval stages of Dirofilaria immitis (L1, L3, L4) and Dirofilaria repens (L1, L3). It is also active against gastrointestinal nematodes. Moxidectin interacts with GABA and glutamate-gated chloride channels. This leads to opening of the chloride channels on the postsynaptic junction, the inflow of chloride ions and induction of an irreversible resting state. The result is flaccid paralysis of affected parasites, followed by their death and/or expulsion.
The drug has a persistent action and protects dogs for 4 weeks after a single application against re-infection with the following parasites: Dirofilaria immitis, Dirofilaria repens, Angiostrongylus vasorum.
After topical administration of the product, imidacloprid is rapidly distributed over the animal’s skin within one day of application. It can be found on the body surface throughout the treatment interval. Moxidectin is absorbed through the skin, reaching maximum plasma concentrations approximately 1 to 2 days after treatment in cats and approximately 4 to 9 days after treatment in dogs. Following absorption from the skin, moxidectin is distributed systemically throughout the body tissues but due to its lipophilicity it is concentrated mainly in the fat. It is slowly eliminated from the plasma as manifested by detectable moxidectin concentrations in plasma throughout the treatment interval of one month.
The T ½ in dogs is about 28.4 days.
Studies evaluating the pharmacokinetic behaviour of moxidectin after multiple applications have indicated that steady state serum levels are achieved following approximately 4 consecutive monthly treatments in dogs.
6 pipettes per box

Please read the  product leaflet  thoroughly before applying to your pet.